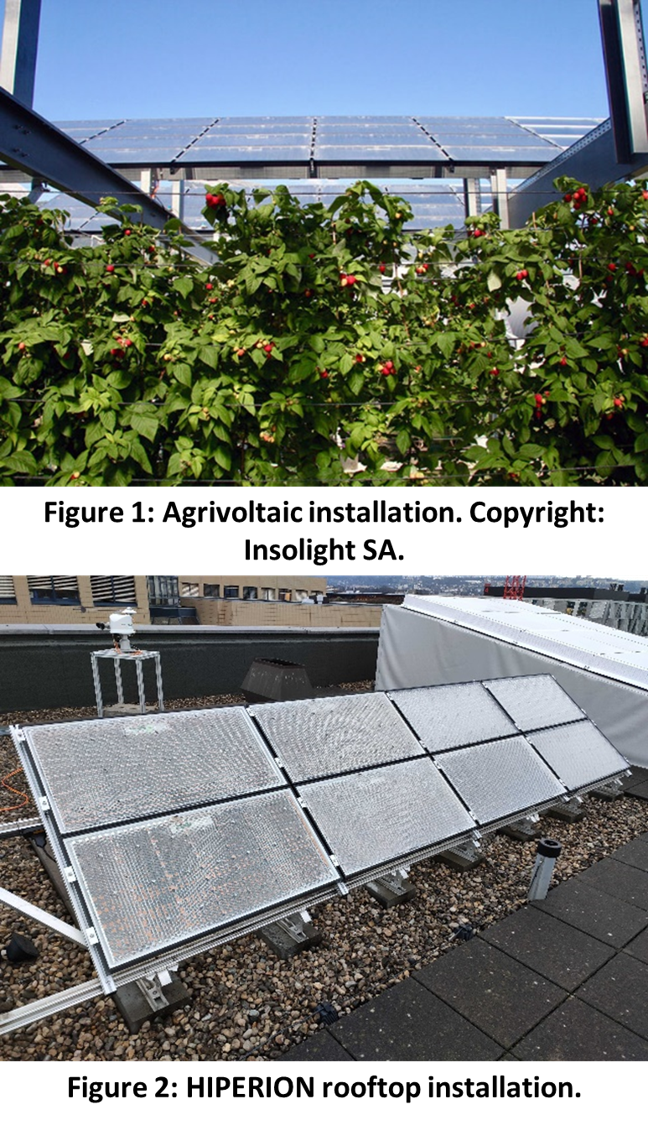 In parallel to the technical developments of the HIPERION module and its large scale production line, a dedicated project task explores the project exploitation pathways, and in particular it analyses the future markets for the HIPERION modules.

At this stage of the project, two main markets appear as being of interest for the technology developed under HIPERION:

• Commercial space-constrained rooftops, where the HIPERION modules bring value thanks to their higher efficiency.

• Agrivoltaics, where the HIPERION modules bring value thanks to their capability to filter and control direct light for protecting crops thanks to the optical micro-tracking technology. This added value is interesting as it opens areas for new PV deployments and goes beyond selling a pure LCOE.

For the rooftop market, which was the main market envisioned during the HIPERION proposal set-up, the main issue is the lack of efficiency, as the surfaces are usually space constrained.

The HIPERION module allows this unique combination of high efficiency into a static module, that can be mounted on a rooftop. So far high efficiency with CPV was only possible at utility scale due to the rotational mounts (dual-axis trackers). However, utility scale is the market segment where high efficiency has less impact, as usually there are no space constraints, and the balance of system costs is better on large scale power plant. Standard silicon PV modules are very competitive on that segment and the entry for a new technology is therefore more difficult.

The HIPERION modules exhibit the same form factor and general appearance as conventional solar panels and can be easily mounted in the same variety of environments, including pitched roofs.

• High direct sunlight irradiance, as the technology provides a booster under direct light.

• Commercial rooftops, as the module orientation can be freely chosen to maximize the electricity generation. It is also easier to accommodate the additional thickness & weight of the modules.

• Regions where labour and installation costs are high (EU, US, Japan, Australia), as those markets are less sensitive to higher costs of modules.

• Installations that are space-constrained (urban areas) where the self-consumption of the buildings exceeds the potential of energy generation on the roof with conventional modules.

• Buildings with zero-emissions targets: it is estimated that conventional PV cannot self-power any building over around 3 floors. By doubling the efficiency of residential PV, six or seven floors Zero-Energy buildings are made possible, which covers most of the building stock in European cities.

Agrivoltaics, or the smart combination of agricultural infrastructure with a photovoltaic installation, was first coined in the 1980s and various solutions are on the market. The existing products have mainly developed around mainstream silicon modules. Silicon modules present some advantages: they have decent efficiency (19% in average), they are in mass production and benefit from very low cost. However, those modules are opaque (blue or black) and therefore constantly shade crops below, degrading agricultural yields. Thus, they are not optimal and often forbidden by regulations on agricultural land.

The technology developed under HIPERION could overcome the shortcomings of the existing solutions. Our goal is to bring to market a reliable module with the highest efficiency, translucency and light intensity control.

In the HIPERION architecture, the silicon backplane allows to harvest diffuse light. However, it is also possible to remove this backplane, to let diffuse light leak through the module. The optical layer focuses direct sunlight onto a sparse array of high efficiency solar cells mounted on a transparent substrate. The integrated micro-tracking system keeps the solar cells in focus of the lenses throughout the day, ensuring optimal conversion of direct light to electricity. Diffuse light, on the other hand, is not concentrated and therefore transmitted through the module and to the crops below, which use it for photosynthesis. Direct light is ideal for photovoltaic conversion, while diffuse light is suitable for agriculture as more layers of the plants receive light. This leads to the following concept: block and harvest direct light in a densely packed photovoltaic installation, whilst transmitting enough diffuse light for photosynthesis.

The resulting photovoltaic module can produce more electricity than a conventional silicon photovoltaic panel whilst enabling plant growth beneath. The module itself does not need to move and is mounted the same way as conventional solar panels. The infrastructure becomes thus more than a solar installation: it is a tool to maximize agricultural yields through a dynamically controlled lighting environment to match the plants’ lighting needs according to season and weather. Additionally, the removal of the secondary cells on the PV backplane leads to a significant reduction of the CO2 footprint of the solution (ca. 50%). The value proposition for agrivoltaics goes beyond only the LCOE. On top of an efficient power generation without land-take benefits, there are several agricultural benefits for the farmers (protection of cultures, dynamic adjustment of shading).

In the coming project months, the large-scale pilots planned in the HIPERION project will demonstrate the modules performances, based on which the business cases will be further developed.